Lzzy and Lita and Dorothy, Oh My! 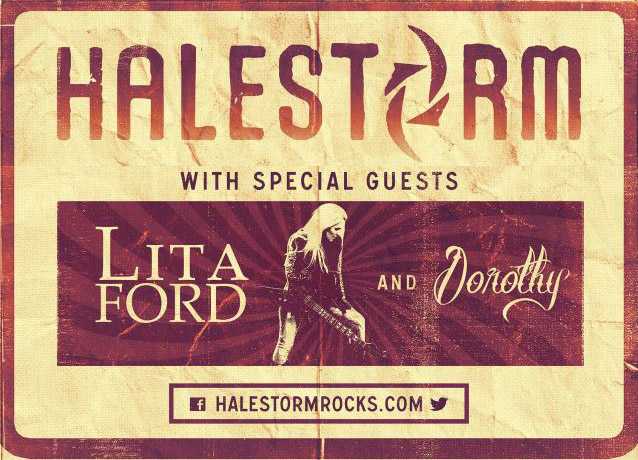 Yes, friends, it was girl’s night out last Thursday at Gas Monkey Live and it frickin rocked!  And I’m not referring to free drinks after 5pm for all the ladies at the bar (although that would have been a nice bonus).  Better yet, I am referring to the fact that last Thursday night was nothing but kick ass female fronted bands the entire evening.  Now that’s something to buy a girl a drink for!

Why? Because even in this day and age, you don’t see a line up like this very often, in particular the rock and metal genres.  Historically, women have taken a back seat to men when it comes to rock music, from being underrepresented in the Rock and Roll Hall of Fame to the general lack of female-fronted chart-topping rock bands on Billboard (click here for citation).

So where are they and why are they so underrepresented?  Female fronted bands are definitely out there – go to any city and you will find one playing every now and then at local music venues.  Search for “female fronted rock bands” on Google and you will find lists of bands to watch in 2016, numerous top ten lists including vh1’s 10 essential female-fronted alternative rock bands of the 90s, female-fronted bands that played during SXSW (not necessarily in rock genre), and many other lists that people have posted over the years.  Search for “female fronted metal bands” and you get another assortment of lists including seven women in metal to watch for in 2015, 26 female fronted bands that rule (not all from rock and metal genres), and a website listing all female metal bands (metalladies.com).  Despite the numerous lists, these talented women “still make up less than 5% of hard rock and metal artists” and usually have a male dominated lineup behind them (click here for citation).

Now the question is why are they so underrepresented?  The show at Gas Monkey Live last Thursday evening certainly proved that it is NOT an issue of quality.  In fact, the entire female-fronted lineup kicked ass from start to finish, beginning with Dorothy.  Hailing from Los Angeles, California and taking the first name of the band’s lead singer, Dorothy quickly proved they could raise hell and gain new fans in the process.  The moment Dorothy opened her mouth and started singing, many of us on-lookers payed homage to the great up-and-coming voice we had the pleasure of listening to in the form of loud cheers and horns up signs.  They played several songs off of their latest album “ROCKISDEAD” including “Raise Hell” and “Dark Nights”, all of which have this down and dirty southern rock and blues infused sound.  To describe it a bit further, elements of their music had a Jimi Hendrix vibe with powerful vocals like that of Janis Joplin, Grace Slick, and Joan Jett.   After listening to Dorothy’s set that evening, one realized that rock is far from dead – it very much lives on with this very band and countless others.

Upon watching the band’s music video for their single “Dark Nights”, I now know that an even better way to pay tribute after such a great set would be to present Dorothy with a package of Hawaiian bread and a jar of Nutella. To fully understand the logic behind said tribute, you are highly encouraged to watch the “Dark Nights” music video.  Do be sure you do not commit word crimes while viewing this music video for the punishment for said crimes should only be attempted if you are a trained stunt devil or a member of the Jackass cast.

In the second hour of the show, the lights dimmed, and rock goddess Lita Ford ascended from back stage to remind us all of how 1980s rock and roll should sound in its purest form.  Recently releasing her long awaited memoir Living Like a Runaway and an accompanying album entitled Time Capsule, Lita is back and sounding better than ever.  From playing some of her biggest hits including “Cherry Bomb” and “Close My Eyes Forever” (with Patrick Kennison singing Ozzy’s parts of the song – go Patrick go!) to shredding like there was no tomorrow, the crowd was educated as to what a rock legend sounds like.

As if the crowd wasn’t awestruck enough by Lita’s presence, mouths were left hanging open when Bobby Rock went into drum solo mode mid song.  Hitting hard and heavy, Rock effortlessly pounded drums, symbols, and mashed on his foot peddle with incredible coordination and lightning speed.  At random points during his solo, the man would twirl his drum sticks and continue playing, not missing a single beat.  If that wasn’t enough, he would rock parts of his drum kit and of course continue playing once more all without missing a beat.  At some point he chugged a bottle of water with one hand and continued playing with the other.  It was one hell of a fun drum solo to witness.  The only thing the solo was missing was a cow bell.

The final set of the evening was none other than the incredible Lzzy Hale and Halestorm.  The freaks in all of us were hanging out and in full view the entire set as everyone just rocked out, drank, jumped up and down, clapped until their hands hurt, and screamed until they started getting hoarse.  With at least a two hour set filled with an arsenal of sing-along Halestorm tunes, it made one want to stand on the bar or a neighboring table and get a big “Amen!” from the crowd.  Songs from the sing-along set included “Mz. Hyde”, “Apocalyptic”, the old school hit “It’s Not You” and “I like it Heavy”.  And then (especially for those in the front row), hearts beat like a kick drum and everyone got crazy with every word and riff of “Rock Show”.

Then, a white piano was rolled out from backstage and the rest of the band exited stage left.  For the next song, Lzzy dedicated “Dear Daughter” to all the girls in the audience that evening.  Lzzy is living proof that even in a male-dominated industry, it’s not about gender, race, or skin color.  It’s about talent.  If you work hard, believe in yourself and follow your heart, you can achieve you dreams no matter what those dreams are.  I will tell you right now, if Halestorm and Lzzy Hale are not chosen to be inducted into the Rock and Roll Hall of Fame within the next ten years, we all need to start a petition to make that happen.

After that emotional moment, the band returned to the stage and kicked things up several decibels starting a lively, heavy tune.  As the crowd went into wild mode and the rest of the band exited the stage, Arejay broke into drum solo mode.  Not only did this solo include cow bells, I swear I heard chimes too!  The jam session then turned into a bit of a sing along with the crowd mimicking every “Eh oh” and completing lines of classic songs such as “highway to hell” and even “Whoop! There it is!”.  But the solo was far from done.  Assistance in the form of Bobby Rock magically appeared on stage and the two drummers beat the ever living hell out of the drums, symbols and anything else they could hit in Arejay’s drum kit.

When the last symbol stool still and the smoke cleared, the crowd roared with appreciation.  How in the world did the band follow up after a drum solo like that?  By playing more sing-along Halestorm tunes of course!  Said tunes came in the form of “I am the Fire”, the old school mega hit “I get off”, everyone going crazy during “Freak like me” and raising their glasses and toasting at “Here’s to us”.  And they didn’t stop there.  Rather than wasting everyone’s time by going off stage, waiting until the crowd screamed loud enough to hear one more song, and then getting back on stage to play again, the band just continued to play. The final segment included a Halestorm version of “Shoot to Thrill”, a little “Mayhem”, and “I miss the misery”.  And then a final bow, exiting the stage, and the house lights illuminating the masses as they made their way to the merch booth or the bar for one final drink.

It was a pleasure witnessing this rare lineup of nothing but kick ass female fronted bands the entire evening.  We highly encourage you to witness this lineup for yourself but do hurry as the Dorothy/Lita Ford/Halestorm tour will only last until the end of October 2016.  Check out the remaining dates on Lita’s website.  Halestorm also has more tour dates in January, but it is not specified as to who they will be touring with on their website.  I’m sure if you click on the date of your choice, you will find more information on that.